Pen preferences are a write of passage 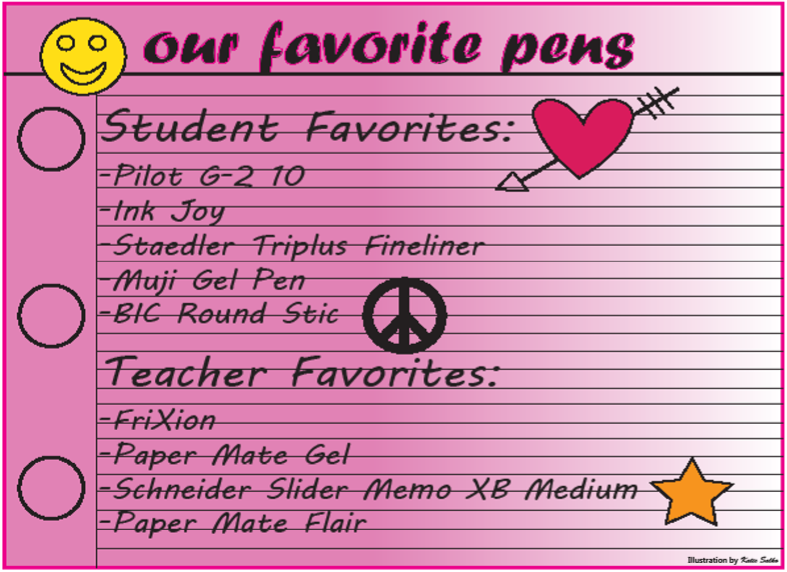 Click-ins vs. lids. Black and blue vs. color. Gel vs. ballpoint. Everyone has different pen preferences and most of us obsess over these small differences to maximize our happiness while stuck in this brick building for seven hours a day.

In the midst of our daily lives as students, we need little things to bring us joy to balance the stress and chaos that is high school. However trivial it may sound, one of these joy-inducing commodities is pens.

Student favorites include the Muji Gel Pen, Pilot G-2 10, BiC Round Stic, and Paper Mate InkJoy Gel. Teacher favorites range from FriXion to Uni-ball to Paper Mate Flair to Schneider XB pens. Some people go as far as to use their choice of ink for everything everywhere.

Principal Joe Jira himself has been engrossed by the pen craze. His favorite pen, the Schneider Slider Memo XB Medium—blue ink, only—ranks sixth on New York Magazine’s ‘100 Best Pens’ list. She is beauty, she is grace.

“I don’t know if it’s a combination of the gel and it being a ballpoint, but it doesn’t get all over your fingers,” Jira said. “I’ve gotten so bad now I will not sign any paperwork without it.”

Many have experienced this dependency firsthand—pun intended.

“If he has to sign something and he’s somewhere else, he will make you walk with him back to his office to get his pen so he [can] sign it,” Social Studies Department Chair Jamie Higgins Shaull said.

Although we know Higgins Shaull as an APUSH teacher and avid Hamilton lover, she is also a pen enthusiast.

“My philosophy as a department chair is that if my teachers want specific types of pens that make them grade faster and [make them] enjoy their job, then by all means, I will spend the money on the pen,” Higgins Shaull said. “Needless to say, I love pens.”

“I buy [Paper Mate Flair pens] in bulk because they’re hard to find,” Zane said. “They come in different colors other than red because I think correcting papers in purple, green, or maroon seems a little different.”

Choosing the ideal pen seems to spark controversy among students and teachers alike. Some prefer the traditional black and blue rather than making it look as if a rainbow threw up all over your notes.

“If I need different colors, I’ll use other pens but if it were up to me, I’d use black pen all the time,” Maria Karvounis (‘19) said.

Sydney Jenkin (‘20) enjoys the presence of both colored and monochromatic.

“To write, [I like] black and blue pens but I like to buy colored pens too,” Jenkin said. “When your notes are colorful they’re just so much nicer to look at.”

Although color can make your notes fun, stand out, and possibly give you more stress rather than the desired peaceful organization, it’s not the only important factor that makes pens unique.

In the Oval Office, pens have a rich tradition that dates back to 1933, when Frankin D. Roosevelt began his first term. Roosevelt the Tastemaker initiated the usage of multiple pens to sign bills of high public interest and every president since has honored and continued his legacy.

President Barack Obama used almost two dozen pens to sign one bill into law back in 2010. That is excessive.

The seemingly universal practice was carried on by President Donald Trump when he used several pens on his first day in office and later handed them out as souvenirs. Trump has a richer taste, however, as his gold-plated A.T. Cross Co. pens sell for $115 apiece.

Are pens taken a bit too seriously? Maybe. But, as Edward Bulwer-Lytton once said, “The pen is mightier than the sword.”

We have relied on this sole writing utensil through its complete evolution: from the quill to the dip pen to the fountain, as well as the ballpoint and, lastly, to what we have today. A combination of all of these stages morphed into one.

Pen preferences are inevitable, thanks to the millions of different options available to our consumer society. It isn’t being picky when it benefits your education and learning ability.

“I definitely take better notes and write better when I have a good pen—so geeky—but I swear that it makes all the difference,” Helena Rudolph (‘19) said. “I get excited to do the best on whatever I am working on and try to make it look as flawless as possible.”

Jira understands and encourages the likability of ink rather than lead.

“You’ve got a lot of writing you end up doing during the course of the day,” Jira said. “You might as well use something that you enjoy using and that flows”

Finding different ways to enhance our learning is important when we suffer through the same types of lessons for 185 days straight. Pens seem like a viable solution to increase the chances of memorization and to keep our classes separate.

“Pens help me organize my work,” Sydney Lippe (‘19) said. “Using different colored pens allows me to differentiate what information is important or things I should focus on. It also makes looking at notes easier and more appealing.”

It’s easy to get a pen at a Target or Staples and buy into the new pen craze, but what about the prospect of making your own? Cameron Powers (‘21) does just that.

He began making pens in the fifth grade and has kept up with the unique practice since then. He spends about an hour making each one but sells them for as much as $50.

“I saw a class on wood turning and I took it,” Powers said. “You use wood and acrylic and turn them on a lathe.”

The creativity that pens inspire is endless.

“If you have to do the stuff, you might as well make it enjoyable. Who really wants to write with this?” Higgins Shaull said as she pointed to a cheap plastic pen.

Whether you admit it or not, pens are quite addictive. They improve your handwriting, increase creative direction, and make school more fun.

“I think everyone—deep-down—has a favorite pen,” Whitney Langlee (‘20) said. I think even if you say you don’t care, you care.”