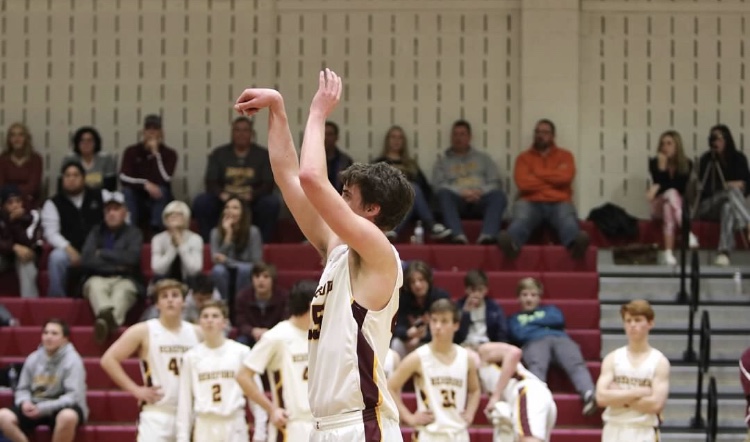 Suchy holds his follow through after shooting a free throw in overtime against Dundalk. The Bulls held on to win 59-56.

Senior Mark Suchy has been a starter on varsity basketball since his freshman year. Not only is he a starter, but he is also a captain this year, along with Mason Greenspan (’19). This season he is the leading scorer averaging around 22 points per game and the leading rebounder.
“Mark is very aggressive and a smart player; he is someone everyone loves to play with because he is so passionate about the game,” teammate Greenspan said.
The last three seasons Suchy started as a point guard, however this year he has been playing as a small forward.
“Mark does a little bit of everything for us,” head coach and math teacher Jim Rhoads said.
Suchy has been playing basketball since he was three years old. And he has been playing with Will Reider (’19) and Greenspan since they were seven years old, “they have a great chemistry on the floor,” Coach Rhoads said. His favorite thing about basketball is scoring.
“There is nothing like hearing the net snap after you release a high arching jump shot,” Suchy said.
This year Suchy has had some impressive games. Against Lansdowne, he scored 31 points and had 14 rebounds. He followed that up with a 28-point game win over Manchester Valley, with a career high of five three-pointers.
On and off the court, Suchy is a leader to all.
“He helps the younger kids learn and deal with situations that they would face in games and makes them a lot better,” teammate Tyler Herkalo (’21).
“Mark has been the leader of the team since his freshmen year,” Coach Rhoads said. “He is a team-first guy who cares more about winning the game than any personal stats that he might accumulate.”
Suchy has received multiple accolades over the years. The last two years he has been All-County and All-Division. He is in the top five all-time scoring at Hereford and received honorable mention All-State last season.
The overall record of the boys’ basketball team is 7-4, beating Towson, Winters Mill, Lansdowne, Manchester Valley, St. Josephs by the Sea (NY), Ownings Mill, and Dundalk.
On Friday Jan. 11 Suchy reached a career high, achieving and surpassing the 1000-point benchmark against Dundalk.
Outside of the Hereford basketball team, he has played for an AAU team, the York Ballers. This November, Mark committed to Franklin & Marshall College, where he will continue his basketball career next fall.