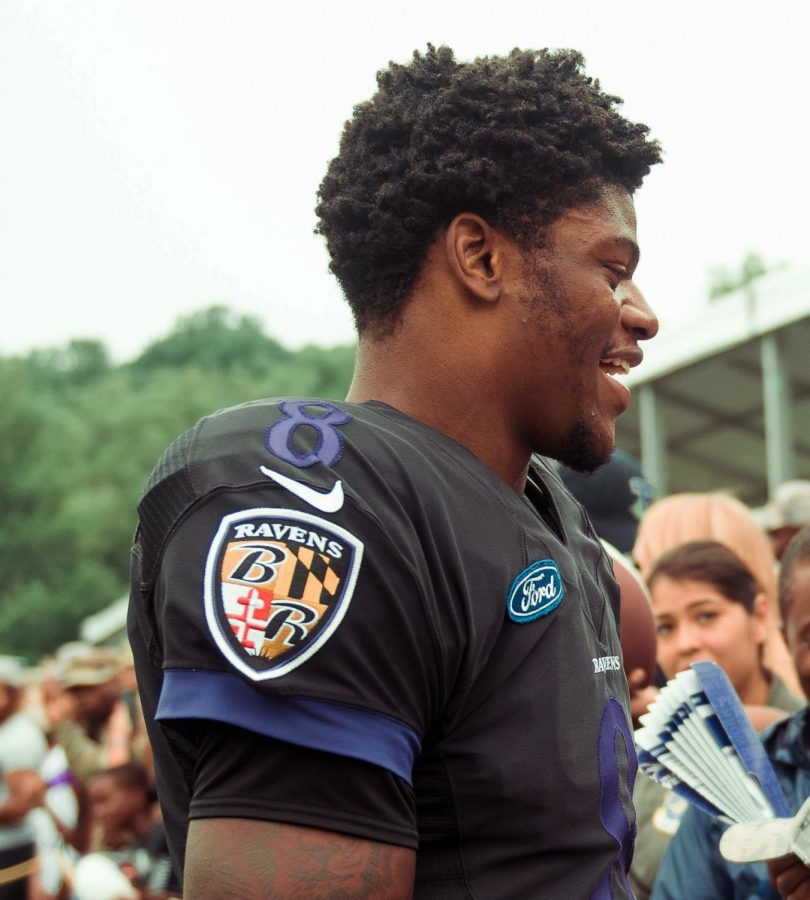 Lamar Jackson meets with fans after one of his first training camps. Jackson was the last pick of the first round of the 2018 NFL Draft.

The fast-paced offense that has cloaked Baltimore in a frenzy of Lamar Jackson hysteria has no doubt been a thrill to Ravens’ fans of all types. Jackson has mastered the style of a backyard quarterback who can create from virtually nothing, with an escape ability that few quarterbacks have ever possessed.
Unfortunately, it is the skills that Jackson has yet to master that make Joe Flacco the right fit for this Ravens team.
As we draw closer to the playoffs, Baltimore finds itself in a familiar situation: fighting for a wild card berth and a chance to make a run in the playoffs. For the Ravens to make it again this year, an experienced quarterback is of utmost necessity.
This is the case for Joe Flacco to start over Lamar Jackson and continue to do what he has historically done: be elite.
Flacco has an illustrious postseason record standing at 10-5; including one of the most historic playoff runs in National Football League (NFL) history, throwing 11 touchdowns and zero interceptions amid winning Super Bowl 47 MVP honors while the Ravens captured their second Lombardi trophy in franchise history.
Flacco has mastered the aerial attack designed by Offensive Coordinator Marty Mornhinweg. In his 11th season for Baltimore, Flacco was enjoying his most statistically productive nine game stretch of his career and was on pace to throw for almost 5,000 yards. All this was derailed when he injured his hip while taking a sack in a loss to Pittsburgh during week nine.
The speculation surrounding Flacco’s hip injury has undoubtedly led many to believe that Jackson has surpassed him as QB1.
This speculation is just that: speculation. Lamar Jackson brings an element to the Baltimore offense that the Ravens have never had: a read-option oriented attack that contains a QB who is as lethal running as he is passing.
This attack has been instrumental in helping the Ravens win crucial regular season matchups. All occurring with Jackson at the helm, next to his new partner-in-crime, Gus Edwards, the undrafted rookie from Rutgers.
Edwards brings a downhill running game to an offense that has lacked it severely with the mediocre performances of Alex Collins. But the running back debate is another conversation for another time.
The modern day NFL has turned into a hotbed for offense, with the Rams, Chiefs, and Saints all building off of monstrous aerial attacks and providing fantasy football owners with very happy holidays.
However, the NFL postseason is another type of animal: the freezing tundra that plays host to the gritty playoff games of December and January, where the breath of every person is as distinguishable as the steam coming off the heads’ of players removing their helmets.
It’s on this tundra where defense reigns supreme, where experience is as invaluable as mittens with hand warmers.
On these fields, there are only a few quarterbacks who have mastered the art of winning. One hails from New England, another comes from the land of Lambeau, a third is from Baltimore’s bitter rival, and the last wears the purple five better than anyone in history.
If the Ravens want to continue their playoff success, Joe Flacco must be the man under center.