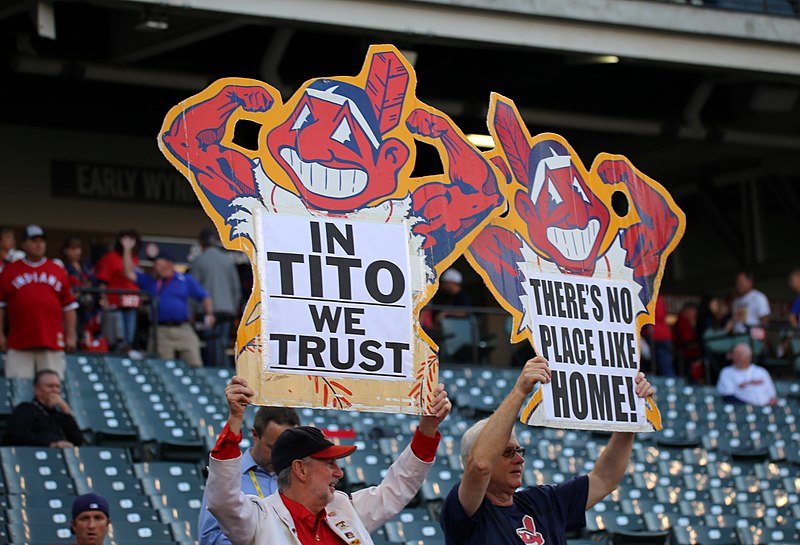 Diehard Cleveland Indians fans brandish their posters, sporting a muscular version of Chief Wahoo. The Indians made the decision, along with some encouragement from the MLB, to remove the logo after the 2018 season.

In the landscape of modern society, everything offends everyon

The latest victim of this is the Cleveland Indians, who will be removing e. Even if the original purpose of the content in no way was meant to offend, someone will find a way to be offended. It’s just human nature in this day and age. the Chief Wahoo logo from their uniforms and all merchandise for the 2019 season.

The move comes after multiple meetings between team owner Paul Dolan and MLB commissioner Rob Manfred. With a 2016 World Series appearance and being slotted to host the 2019 All-Star Game, the pressure mounted on the Indians to do something about the divisive logo.

The Chief Wahoo logo, which has been used in various forms since 1947, features a big toothy smile and a red face; a caricature that many correlate to a racist view of Native Americans. That view doesn’t translate to the city of Cleveland however, the home of the now disgraced Chief Wahoo.

In a poll conducted by WKYC3, a news station in Cleveland, 62 percent of Northeastern Ohioans said the logo gives them pride and 70 percent said it “represents more than the team—it represents the city of Cleveland.”

With a logo that has been around for 71 years, emotional attachments are bound to happen. Fans of the Indians grew up watching that team and rocked gear with Chief Wahoo on it. To them it doesn’t represent a racist outlook on a group of people; it represents a lifelong team connection.

The naming of the Indians came in 1915, when star player Nap Lapjoie left the then apply named Cleveland Naps. The story goes, the team owners solicited sportswriters to ask fans for new name suggestions and a young girl wrote in with her suggestion of Indians. In her letter, she specifically mentioned Louis Sockalexis, a former Cleveland player who is widely recognized as the first person of Native American ancestry to play in Major League Baseball, and his heritage being important to the team.

A story from 1915 doesn’t carry much weight to it, lacking many reputable sources, but the sentiment is there. The name wasn’t chosen to poke fun at Natives or their culture, it was out of respect.

The majority controversies stem from Native American based logos, enough to warrant their own Wikipedia page (“Native American mascot controversy”), but the conversation isn’t limited to them.

College of Holy Cross’ mascot, as expected for a Christian School called Holy Cross, is a Crusader. The Crusader name was formerly depicted by a knight mascot and logo featuring an armored medieval soldier wielding a sword.

The school announced in March the Crusader name would remain but the knight mascot and logo would begin to be phased over the next several months. In its place, an interlocking HC over a purple shield will act as the new logo. The school will retire the use of a costumed mascot.

The school’s explanation for the sudden change is mainly rooted in ties to the Crusades and other religious wars. Although Holy Cross, founded in 1843, had nothing to do with the Crusades of the Middle Ages, the school felt any relation at all would be going against their brand.

If that’s the case, the school might as well drop the whole religious shebang. Medieval knights didn’t cause the Crusades, blindly following a religion even when the leaders of that revolution are calling for mass murders is what caused the Crusades.