Chase Crawford looks to lead the Bulls towards a championship 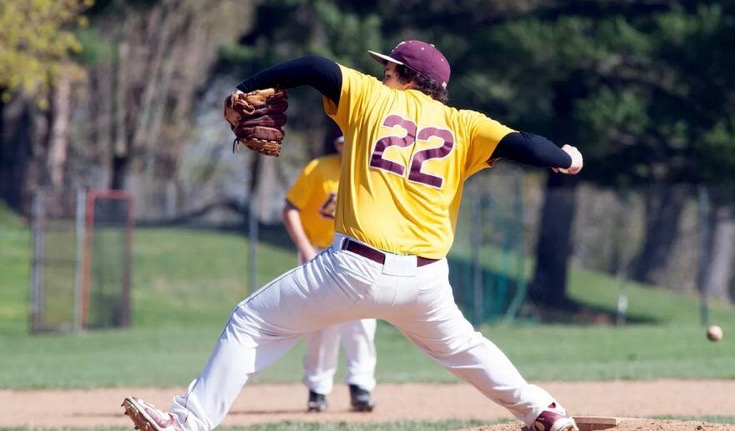 Crawford unleashes a pitch against an opposing batter. He employed up to four pitches last season.

Chase “Big Hoss” Crawford (’18) has been playing baseball for ten years and has been on varsity for over two years.

Crawford is a pitcher who dazzles opposing batters with an arsenal of pitches that include a two-seam fastball, change-up, slurve, and knuckleball.

He was able to develop and work to perfect these pitches through countless hours of hard work.

“Chase has so much passion for the sport of baseball. This makes him the great pitcher he is,” Jimmy Danielcyzk (’18) said.

Danielcyzk would certainly know— he has been playing with Chase for over six years.

Crawford was first able to pitch on the varsity level during the latter part of his sophomore season. He got the start in a playoff game, and the team came away with a win. It was his first varsity start and his first varsity win.

When asked to describe what Crawford brings to his team, Varsity Baseball Coach, Ric Evans said, “Big Hoss is a true fan of the game, very knowledgeable, and loves being on the field. [He] has a nasty knuckleball and can hit— all things that make him standout.”

He loves throwing the knuckleball because “nobody expects it at a high school level,” Crawford said.

According to NPR, the knuckleball is the most difficult pitch to throw, because it must be gripped with two fingernails and pushed towards the plate. This allows for air to flow over the stiches of the ball and creates a chaotic movement, increasing the difficulty to hit.

Crawford has multiple superstitions when it is his turn in the rotation to pitch.

“I always avoid stepping on the foul line when taking the field. I also always walk to the mound,” Crawford said.

This might be a contributing factor to Crawford’s ability to “[employ] a lot of different pitches and control to hit the corners,” Ryder Fleishmann (’19), who has been his teammate for three years, said.

Crawford also has a natural ability to lead, furthering the value he brings to the team. “Chase is a leader by example- he demonstrates a great work ethic and is the ultimate team player,” Evans said.

This work ethic has helped make Crawford a vital part of the team. A team that is of utmost importance in his life.

“I found my second family. I love all of the guys that I play with,” Crawford said.

For his senior campaign, Chase has high aspirations.

“I want a banner, Coach Evans wants a banner, everyone on the team wants a banner,” Crawford said. By banner, he is referring to a Maryland Class 2A Baseball State Champion banner.

With Crawford on the mound, those title aspirations are within reaching distance.

“He is a very reliable pitcher that the team needs to win games,” Fleishmann said.