Why the red face? Students discuss their embarrassing moments 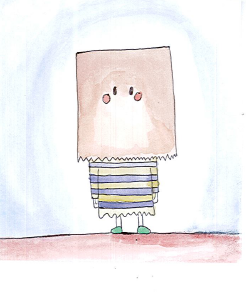 Illustration by Amanda Rodier and graphic edited by Daniel Stewart

Embarrassment is one of the most uncomfortable and awkward emotions one can feel. According to GoodTherapy.org, embarrassment typically occurs following an accidental failure to meet accepted social standards. Unpleasant situations such as embarrassing moments alert self-consciousness, which is linked to internal discomfort.

On the other hand, what may seem like the most humiliating moment to one person, is simply a funny and laughable moment to others. In their eyes, it was a humorous failure that they got to witness. They’ll laugh about it for a couple minutes and move on.

However, it isn’t so easy and comfortable for the one who was embarrassed. According to the American Psychology Association (apa.org), when something embarrassing occurs your body sends an alert to the brain because it feels socially exposed, thus creating a panic.

Matthew Feinberg, a doctoral candidate, teamed up with social psychologists Robb Willer and Dacher Keltner to explore the social benefits of embarrassment. Through their research, they found that those who show more outward signs of embarrassment, when describing their own embarrassing moments, are more outgoing and prosocial people. This is because they are more publicly-open with their emotions and able to express how they feel.

The amount of humiliation one feels is dependent on their own interpretation of social standards and what they believe socially exposes. Along with that, according to Anja Eller, an associate professor of social psychology at the National Autonomous University of Mexico, people are more likely to be embarrassed when the error takes place around members of their own social groups. With that being said, the close friendships allow room for expression of emotion, while psychologically and subconsciously repairing the social relation.

High school is the gold mine for embarrassing moments. Its four years of uncomfortable encounters and awkward scenarios, and the same people witness them over and over. But as time passes, recounting embarrassing memories with your old classmates will be found humorous rather than embarrassing.

Lindsay Posner (‘20): “I was in AP World and we were talking about China and I raised my hand and said that rice was made out of potatoes and vegetarians could eat it. My whole class just laughed at me and talked about it for a while after and it was pretty embarrassing.”

Niko Hillary (‘20): “I was in Mrs. Hanley’s class for English and we were working on our papers. I found an un-used tampon in the recycling bin. I opened it up and went over to my friend, Max Bohlmann (’20), and put it in his hood without him noticing. And while everyone was silent and Mrs. Hanley was talking, Max holds the tampon up for everyone to see and screams out ‘Hey Niko is this yours?’ My teacher took me out in the hall and talked to me and when I came back in everyone was still laughing about it.”

James McHugh (‘20): “Last year in Mr. Aitken’s class I had a water balloon that my friend gave me sitting in my lap and it popped and went everywhere. My books and pants were soaking wet. Everyone in the class stood up and were yelling. I had to leave the room and get a new pair of pants.”

Gaige DuBois (‘19): “I was in English class and we were performing Shakespeare in a modern-day skit. I was with my friends Rachel Sanders (’19) and Maria Karvounis (‘19) and a couple other people. I was wearing jeans that day and we were out in the hallway practicing and we dropped it too low and my pants ripped. I had this huge split down my entire leg. It was the worst thing ever. Thankfully Maria gave me her jacket to tie around my waist for the rest of the school day.”

Noah Wisner (‘18): “I was in weight training class in 10th grade and I had Coach Evans. It was a nice day so we were playing football up at the track because we were done pumping iron. I was about to score a touchdown for the twenty-fifth time and I was going to do the Marshawn Lynch celebration. I put my hand in the air and fell backwards; I tried to catch myself and landed on my left wrist and it snapped back. Later on we were walking around the track and I slowly started to feel like I was going to pass out. I eventually went to the nurse’s office and found out I fractured my wrist from celebrating a touchdown.”

Maria Starling (‘18): “After the winter rehearsal in 9th grade I was walking down the stairs with my violin and I was wearing high heels. I tripped over my own two feet and fell down the stairs. My legs were just dragging down the stairs and my violin was just clacking hitting the ground over and over. I just sat there and didn’t move. When I turned around this one girl was just staring at me and was like ‘Oh my gosh are you ok?”

Colin McGuigan (‘18): “In Mrs. Moran’s class in 10th grade, I was walking back from turning my paper in and her coffee mug was sitting on the corner of her desk, I accidently knocked it off. The mug shattered and the coffee went everywhere and spilled all over a junior girl in my class. I had to buy Mrs. Moran a new mug.”