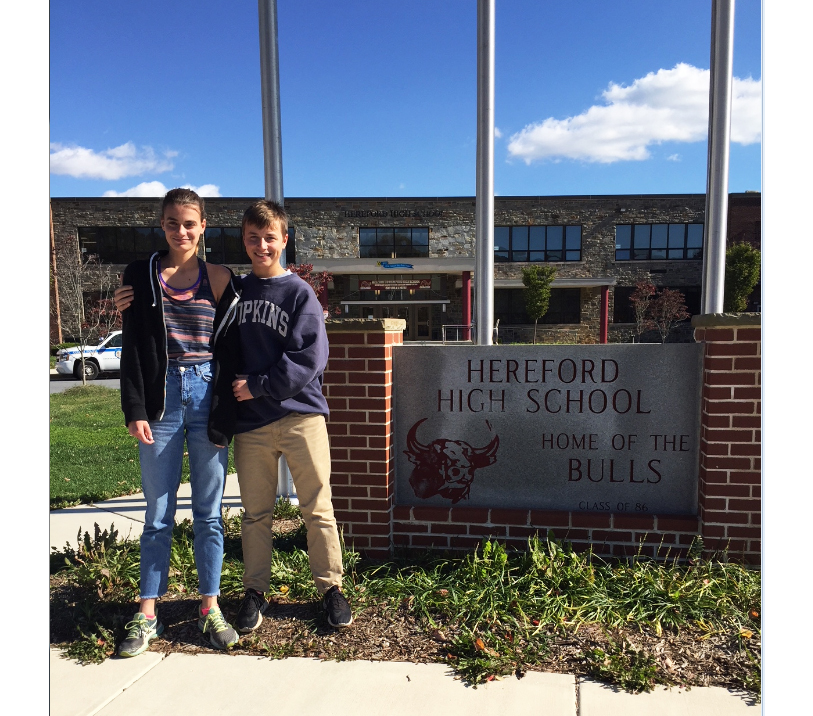 Photo provided by the Gross family

Sarah Gross ('19) and her twin brother Simon Gross ('19) enroll as juniors after moving from Germany. The siblings commented on the differences between German and American culture.

Twins, Simon Gross (‘19) and Sarah Gross (’19) are new faces here at Hereford, they transferred from their life in Berlin, Germany, to a small town, in a completely new country this past summer. The normality for us in America, is a foreign experience to a newcomer looking in. When comparing their new life in America to their life in Germany, you might wonder, just how different our lives in America are compared to the lives of two people coming from a contrasting cultural background.

From an academic perspective, the schools in Germany treat the students with a sense of maturity and trust them with responsibility.

“In Germany we had the freedom to run out and get lunch and then come back to school,” Simon said.

On the other hand, almost all of the classes in Germany are AP courses. Their schedules are made for them and the workload is challenging to say the least.

“The teachers and the community give the students more freedom and opportunities to do what you want and be independent. But with the classes, it’s the exact opposite. They make your schedule and you have to follow it,” Sarah said.

Hereford students cannot wait to get a parking sticker, and finally be able to drive themselves to school. This benchmark does not hold significance in Germany.

“In Germany we can’t get our license until we’re 18,” Simon said, “I lived in Berlin, so I didn’t have to drive anywhere. I could ride my bike or walk to school.”

Unlike Hereford, the two could walk anywhere they pleased. The bus station and subway are also a popular way of transportation in Germany. It is hard to imagine riding your bike up the hills of York road, while also having a line of road-raged drivers ceaselessly honking behind you.

However, those road raged drivers do not even compare to the bitter demeanor of the people walking the streets of Germany.

“In general everyone is a lot nicer and open to other people in America. In Germany people come across rather rude,” Simon said.

There is an acknowledgeable difference between the teenage cultures as a whole. For instance, American boys do not quite match up to the boys back in Germany.

In Germany, most boys’ physical appearance is more developed when compared to American boys.

On the other hand -to give American boys a little credit- they pull ahead when it comes to their clothing.

“The [German boys’] style can be kind of awkward though. [American] boys seem to wear a lot of sports clothes,” Sarah said, “In Germany, they sag their pants and wear ripped jeans.”

The girls in Germany tend to get along with almost everyone.  American girls can come off as competitive, unlike German girls who aren’t as assertive.

When it comes to the high school party scene, it’s a different atmosphere when comparing America and Germany. The reason being, one is legal and one isn’t.

“You can drink when you’re 16 in Germany,” Simon said.

The drinking age makes the difference. It’s safe to say that the majority of high school parties in America involve a lot of sneaking around, a well-thought out strategy, preparation, and pleading the fifth the next morning.

“In comparison to Germany, people have a rather immature attitude towards drinking and partying.” Sarah Gross said.

We can assume based off Sarah’s experience, drinking is more controlled in Germany because they have access to alcohol at a younger age; they can learn how to behave around it.

Next to drinking, the biggest contrast between Germany and America is politics. On the political spectrum, Germany tends to sway more towards the left. As a whole, most Germans are more liberal, and there are fewer disputes.

The majority of Americans find it very important to express their opinion in every situation possible. From social media, to face-to-face interactions- political discussions in America can become very heated, very fast.

“In general, political topics [in America] are much more heated here and people get much more aggressive,” Sarah said.

Our most recent election, did not only occupy the attention of our citizens, but the attention of other countries as well. When Sarah and Simon first moved here, they were surprised to find that there were so many Trump supporters.

“People in Germany think that when Trump was elected it was just a big joke,” Sarah said.

Along the lines of politics, comes patriotism. American pride is one of the most valued aspects of our country. Schools around the country dedicate spirit days to “USA pride,” there are celebrations throughout the nation that bleed red, white, and blue, and we light up our skies with fireworks on the fourth of July. Everyone has their own issues with our country and how it is run, but at the end of the day American patriotism always shines through.

“People in Germany find America’s patriotism and how much Americans love their country absurd,” Sarah said.

For Germany, going all out for patriotism is nonsensical. With their history during World War II, Germans still feel too ashamed by their actions to show the same pride for their country. They are skeptical of anyone going out of their way to show honor for Germany.

“We can’t take patriotism over board,” Simon said.

When we drive down the streets of a town, we don’t always notice the frequency of American flags hanging from buildings, but for Simon and Sarah, the excess of the flags was one of the first things they noticed, followed by the reciting of the Pledge of Allegiance every morning at school.

“Saying the Pledge of Allegiance every morning wouldn’t be socially acceptable in Germany, but in America it’s encouraged,” Simon said.

From a school atmosphere, to clothing trends, to politics, and everything in between, Germany and America have their fair share of differences, but hopefully there is comfort in knowing there are also similarities to help Sarah and Simon adapt to their new home.