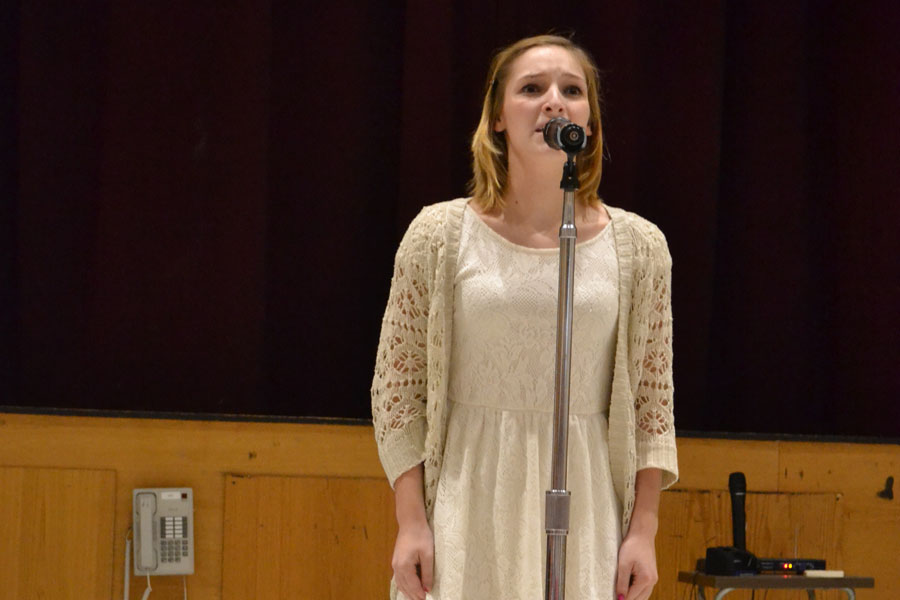 Adriana Culotta ('15) recites "The Hospital Window" for Poetry Out Loud. She was awarded first place.

The school-wide Poetry Out Loud competition was held on November 25 during 6th period in the auditorium. The competitors were students who had won their class competitions, which were held last week in English classes. Coordinated by Creative Writing teacher Lisa Sopher, the contest was judged by Sopher as well as English Department chair Michelle Stachura and Social Studies teacher Terese Trebilcock.

Teachers appreciate the event and the light in which it presents Hereford High School. English teacher and Pioneer advisor Jamie Stinefelt said “Poetry Out Loud is a nice reflection on our school.” Stinefelt also said that there are many qualified students who take the contest very seriously.

Poetry Out Loud is an annual event that was created in 2006, with pilot programs in Washington, DC and Chicago. The competition has since grown to involve students across the country. The basis of the competition is to learn about poetry through memorization and recitation. In addition to helping with memorization skills, the Poetry Out Loud website states that students are able to work on public speaking and self-confidence.

It’s common for students to dread the contest. Some people simply do not enjoy having to memorize the poem, and others become nervous when it is time to recite their poems.

Students often find it awkward to recite poetry in front of their classmates. “I never know what to do with my hands or where to look,” Maddie Hoover (’15) said.

Other students enjoy the competition.

“I love Poetry Out Loud!” said Adriana Culotta (’15). She performed the poem “The Hospital Window” by James L. Dickey. The poem was 63 lines long. Adriana chose a longer poem for this year’s competition because her poem for last year was too short.

“I went to Mr. Rose and told him that I really wanted to do well.” Adriana said. Mr. Rose helped Adriana find a poem that was both long enough and difficult enough to get more points for complexity.

Scoring involves both a performance score and an accuracy score. Included in the performance score is physical presence, voice and articulation, dramatic appropriateness, level of complexity, evidence of understanding, and the overall performance.

The accuracy score is a maximum of eight points. An accuracy judge follows along during the performance. When the performer makes a mistake in their poem, they lose points. Some only cause the performer to lose one point, such as confusing an article or pronoun. Other inaccuracies range from losing two to six points. These mistakes include reversing or skipping lines or stanzas.

The accuracy judge also may serve as a prompter. Every time a student uses the prompter, three points are deducted from their final accuracy score. This point deduction is one of the reasons why serious competitors rehearse so much.

Ashlyn Nozemack (’16) said that she “rehearsed in front of her stuffed animals,” to memorize her poem, “Sanctuary” by Jean Valentine. She chose the poem because she “liked how it conveyed both life and death.”

Jake Rayburn (’15) prepared for his recitation of the poem “Anthem of Doomed Youth” by Wilfred Owen by conducting research. “I prepared for my performance by researching the background of the poem’s author, as well as researching the nature of the time period in which he lived, so I could get a better understanding of my poem,” Jake said.